What’s the big deal with the Wonga myopia?

What’s the big deal with the Wonga myopia? 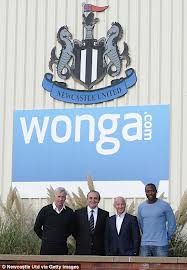 I have been getting increasingly wound up by the recent furore over Newcastle and the Wonga shirt deal. http://www.bbc.co.uk/news/uk-england-19926172

Whilst on the one hand it’s a nice change to see anyone in football taking a moral stance on anything these days, it’s a bit fresh picking on this particular shirt deal when the rot stretches into football far further than most people understand.

As far back as April of this year, I raised the issue of the way that high street Banks are able to charge the most horrendous rates of interest (up to 800,000 % APR – yes you read that right…) to those who were least able to afford it, by exploiting loopholes in consumer legislation whilst the payday loan companies take all the flack. http://www.cardinalpartnership.com/?p=396

Perhaps the conversation should be opened up to include why football tolerates the Barclays sponsorship of the Premier League, or Santander in Formula 1, HSBC at Wimbledon or RBS with Rugby on the same basis…